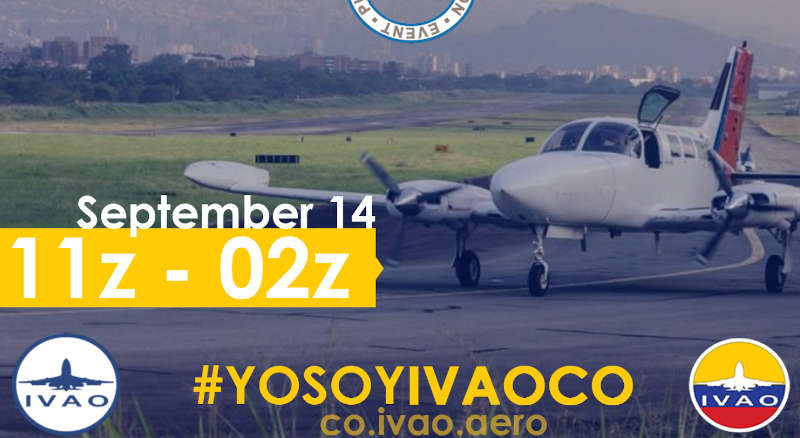 About couple days ago I noticed an event in Colombian’s division IVAO. And idea of the event and its location immediately attracted me.

Medellin is one of the most important cities of Colombia, Medellin is called “La ciudad de la eterna primavera”.

Below you can see my video about this event.

Preparing for the event

When I started to read information, I found that all charts are given in Spanish. At the first I decided refuse to take part this event… But the place of the event… Colombian mountains… and organizers gave a custom scenery (incl X-Plane 11) for the event… I couldn’t register for the flight as many others, but I made a decision to take part in it!

Flights in the mountains are very specific. Here in Medellin you have to gain altitude up to 14000ft before going to route because SKMD airport is placed in a valley.

THE BEGINNING WAS TERRIBLE

I sent my flight plan as IFR and was very surprised that it is possible to start from SKMD as VFR only (in the mountains). It was something really new for me. For IFR only you could start from SKRG airport, which is not far from Medellin.

My flight plan was for IFR and I started to correct it to VFR to IFR.

IVAO system, “your flight will be reset”

It forced me to reconnect to IVAO. Then I couldn’t reach any controller in Olaya Herrera Airport. I used ground and tower frequency by voice and wrote them… After 12 mins of unsuccessful attempts to connect a controller I thought that they left me alone due my problems with the flight plan 🙂 And then I decided to fly and started to taxiing…

An controller appeared and connected with me when I was in the middle way to the runway. He stopped me and said that he will report to a supervisor if I will take off.

Problems with my first IFR flight in IVAO

Then the controller checked my flight plan and he found a lot of errors… Then I totally confused with my flight plan. He demanded that I should write visual CALDAS point in the route section. Yes, I saw this point on the map which was offered by the organizers, but there everything was in Spanish 🙂 So I couldn’t read description for this point. Then I tried to find this point in my GPS – nothing! Then I compared GPS data with “Spanish map” and found that CALDAS point is placed near ASIRU on my GPS. So, I inserted ASIRU as a reference point.
Then the controller demanded that I write altitude parameters for CALDAS visual point in my flight plan… Frankly speaking, I didn’t have any clue how to do it and asked to help me. The controller checked my flight plan again and again after my corrections…

At the end I received clearance for take off.

Not enough of oxygen

After I climbed at 14000ft, the picture in my sim started to become dark!

VSKYLABS DC-3 has a function of simulation if you have don’t have enough oxygen at high altitude – my altitude was high and I needed to switch on oxygen and simulate that I wear a mask. In dark fog I couldn’t find where to click to open the oxygen supply and then I couldn’t see clearly where is my mask (I need to click on it to). You can see it on my video LOL…

Additionally to maps in Spanish language, I had problems of understanding controllers during the event, especially in the first part of the flight. Actually, English is not my maternal language. Sometimes their voice was broken during the transmissions. Sometimes they spoke very fast, although the traffic wasn’t so busy to be harried.

It is funny… Maybe I am wrong, but it seems that they are trying to simulate “carelessness speaking” of the real word i.e. they trow off a lot of an information as a real controller 🙂 In most cases I didn’t understand their intonation and couldn’t separate their words. When they wrote something I understood it clearly but there was another problem – I couldn’t release my yoke for long time to write an answer.
During flights we all use specific lexicon, so I need to fly more in IVAO network.

The rest flight was nice and wonderful. I reached SKUI and landed successfully.

IVAO has a lot of events… Why I chose this event:

Although I have some problems of flights I really enjoy this my first IFR flight in IVAO. I receive a lot of experience.

I would say thank to the Colombian Division of IVAO for this event!

X-Plane: my first flight in IVAO

Around The World on C-47 Skytrain